Each sponsored wreath helps to ensure a veteran has a wreath on their grave in remembrance and dedication once they pass, but that extra $5 means a veteran’s t-shirt or meal on the Honor Flight is covered at no cost to them.

Wreaths Across America is proud to partner with nonprofits and veteran service organizations across the United States in supporting our nation’s heroes and thanking them for their service. Through our fundraising group efforts, WAA stimulates other charitable funds by returning $5 of every $15 wreath sponsorship raised. In doing so, we “do good twice,” recognizing the commitment made by VSOs and other nonprofits to support WAA by directly giving back to their missions in turn.

In early May, 82 veterans from Iowa, Minnesota, and South Dakota boarded an American Airlines flight to Reagan National Airport for a whirlwind, all-expense-paid tour of Washington, D.C., including stops at Arlington National Cemetery, the Marine Corps War Memorial, the Air Force Memorial, and the memorials that immortalize their service in World War II and the Korean and Vietnam Wars. This Midwest Honor Flight, one of at least 130 regional hubs of the Honor Flight Network, was made possible in part by the incredible efforts of Aaron Van Beek, president and director of the Midwest Honor Flight nonprofit.

“I never served myself,” he says, “but three of my great-grandpas and one of my grandpas all served in the Army. The military, and honoring that service has always been important in our family.” Aaron recalls various Memorial Days spent together with those grandfathers, “decorating our bikes so we could participate in the local parade alongside our grandpas that were marching.”

But in the summer after his senior year of high school, Aaron had the chance to take a tour of Washington, D.C. Much like WAA Founder, Morrill Worcester, it was Aaron’s trip to Arlington National Cemetery that stuck with him most. “But we had Twitter then,” Aaron quips. Just a click later, he was following the Cemetery online and saw pictures of Wreaths Across America Day. “I thought, I’d love to participate in that. In doing some research I found I could start a location here in Sioux Center, and since 2015 we’ve been able to lay wreaths out here.”

Aaron thinks back on his grandfather’s experiences often. “They served during a time when we didn’t have a volunteer army. Now, thankfully, we’re very blessed that we have that, those willing to put their lives on the line for us all if and when need be.

“That’s why I do what I do now with WAA and the Honor Flight. It’s my way of being able to give back to those that have gone before and given us those freedoms. They did so much to set the pace for our nation and the military the way it is today.”

The Midwest Honor Flight based in Sioux Center, Iowa incorporated in March of 2017. Since then more than 320 veterans have been afforded the opportunity to visit Washington, D.C. and reflect at their memorials. While that may seem like a lot in just two years and over four flights, the group also manages a waiting list of 650 veterans. “We’re proud of our numbers,” said Aaron. “We’re glad these veterans want the opportunity to go and they’re willing to make the trip for that healing and closure on an exceptional period in their lives. But at the same time, we recognize the need to fund these flights.” 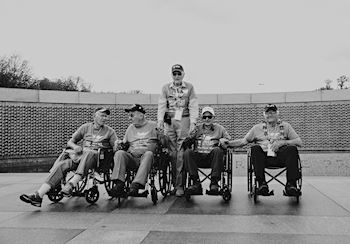 Aaron explains that by pairing WAA and the Honor Flight together, he truly can “do good twice”. “Each sponsored wreath helps to ensure a veteran has a wreath on their grave in remembrance and dedication once they pass, but that extra $5 means a veteran’s t-shirt or meal on the Honor Flight is covered at no cost to them. “It’s helping those veterans that are still with us, many of whom are still hurting and need this closure before it’s too late.”

And for the veterans on the Honor Flight, the trip comes right on time.

During lunch at the Air Force Memorial, on a hill overlooking the south side of Arlington National Cemetery, I chatted with brothers Arthur “Al” and Donald DeWit of Iowa. Arthur served in WWII as a radio operator. At 92, he sits wheelchair-bound surrounded by his granddaughter and four great-grandchildren who came from western Virginia to share in this experience. 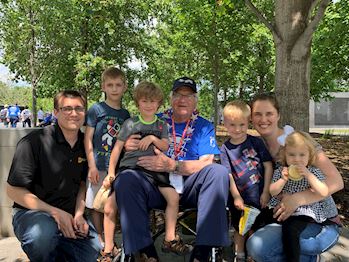 Al doesn’t share much about his time in the tanks and on the radio, other than explaining how he had to learn Morse code and tap out sixteen words a minute.

“When you ask him about his time in the military, that’s the first thing he says, ‘Oh it was over by the time I got there,’” chimes in Amy Wright, Al’s granddaughter. “He’s not one to be proud of anything. But he did continue a life of serving. He was in prison ministries, worked at the soup kitchen, he taught people with intellectual disabilities. His whole life has been one of service.”

The entire family recognizes the important of hearing Al’s stories as they sit under a shady tree. “I realize [my kids, his great-grandchildren] can’t place his service in a time,” adds Amy. “They’re asking if he had a battleship with sails on it, or did he have a horse.” But even the littlest Wright can understand how important it is that “Grandpa Great” was able to make this trip.

For his brother, Donald, “It’s nice to know that people remember us.” Donald DeWit was similarly drafted into the Army not long into the Korean War. He recalls one winter on Heartbreak Ridge when the brutal cold meant having to share coats and wool socks when they could be found.

Aaron, Amy, and Donald’s granddaughter, Jenny, who was able to join the Flight as a photographer and media support all recognize the change in the veterans on the trip as they experience Washington, D.C. and the memorials in their honor.

“I don’t consider this a chore,” said Aaron. “These Flights, laying Wreaths, it’s the least we can do as American people for those that have given so much. Our freedom is not free. It came at a very high cost. And it’s our generation’s turn to remember and continue to honor that sacrifice.” 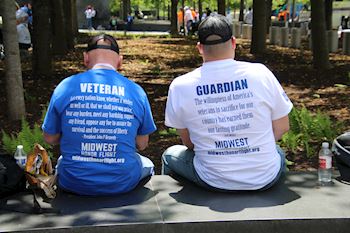